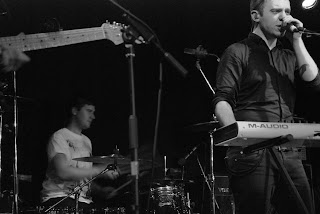 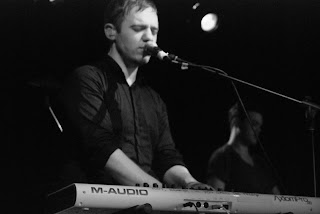 From Manchester (cue references to historical indie obscurity) Everything Everything have steadily risen from being just another wacky indie band on the BBC Introducing Stage to having their first album Man Alive hitting the top twenty in album chart sales. Their busy tour hit our very own SU academy on the 5th of September.

A few hours before the show I was ushered behind the stage by a distracted looking tour manager. I’m introduced to Lead vocals Jonathan, Bass Jeremy and Guitar Alex (who promptly fell back to sleep on the sofa and stayed that way for the remainder of the interview). Jeremy is tall and well spoken, Jonathan is wearing surgical scrubs.

Jeremy - Definitely. Just for not wanting to let go of the basic totems and emotion caused by shape of a musical phrase I suppose.

Jonathan - We like the hidden sadness in shiny commercial pop music, when you take it apart and look at its bare bones theres of lot of real melancholy in the actual writing of it, I think maybe we take that on a bit.

EE’s music does teeter between shiny pop and outright pretension, resulting in a tongue-in-cheek charm that infuriates as many as it delights. Something quite rare about the band themselves is the attention to detail in both the lyrics and the music behind it. I asked them to explain the elements of the music that they thought about first when constructing a song and how they approached recording it all.

Jonathan - ‘Errm...chords and harmonies and rhythm is what we start out with. It’s very rarely an extended lyric, it might be one or two phrases. Some of our recording is really slick, some of it is really cheap. On one of our demos we had this horrible synthesized harpsichord. We always assumed we’d swap it out for a real one but the producer said “No this part of your sound, keep it in!” Some of the bedroom demos we made were included on the album as well because there was something about them that made them worth listening to in that state. It would’ve probably killed it if we did it again.’

Finally I asked them to list some bands they’d been listening to recently, they were refreshingly vague in their response.

Jonathan - ‘We really like the Foals record, the Arcade Fire album as well. Besides that...R Kelly put a new album out, we love that.’

Jeremy - All I’ve been listening to is jazz of late. The Bad Plus released a new album, we all love it. Especially him, he’s jazzed-out

A few hours later the que outside the canteen that is live venue is reassuringly long. Clientele including the late-teens NME crowd and a few cynical bearded musos who must have been impressed by EE’s stellar performance on Jools Holland a few weeks back.

When they finally hit the stage the band deliver a tight energetic performance. Jonathan's twitchy falsetto voice hitting every syllable and the rest of the band’s noodling is perfect. Fully conscious this time, Alex proves to be an incredibly skilled guitar player. The set is full of everything we knew from the album already and some new songs, including an a-capella tune with vocals from every band member (believe me, it sounded much better there than it does being read from this sheet of paper).

It’s all too easy to dismiss Everything Everything as a half baked attempt of industry hacks to pocket the EMA grants of naive sixth-formers (one writer at pitchfork.com dismissed the lyrics that reference internet culture as ‘the self-absorbed musical equivalent of having 12 browsers open at the same time’).

Yes, they are a squeaky clean pop group when you put them next to the music press’ so called ‘slacker rock’ scene that may or may not be happening at the moment, but delve a little deeper and you’ll find a collective of people that love having a comprehensive taste in music so much that they want to be in the band that does everything. Hence ‘Everything Everything’ I guess.